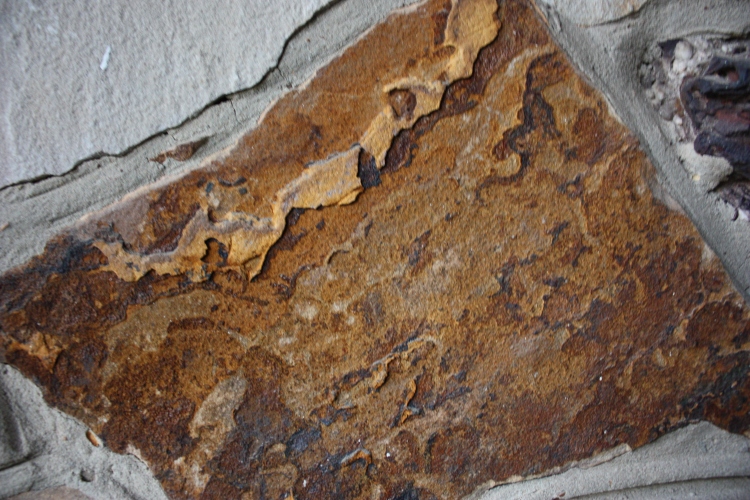 “Molded steel and cast aluminum are machine manufactured, and as a result they bear the stamp of technological ideology. Steel is hard, tough metal, suggesting the permanence of technological values. …Yet the more I think about steel itself, devoid of the technological refinements, the more rust becomes the fundamental property of steel. Rust itself is a reddish brown or reddish yellow coating that often appears on ‘steel sculpture,’ and is caused by oxidation, as during exposure to air or moisture. …In the technological mind rust evokes fear of disuse, inactivity, entropy, and ruin. Why steel is valued over rust is a technological value, not an artistic one.

By excluding technological processes from the making of art, we began to discover other processes of a more fundamental order. The breakup or fragmentation of matter makes one aware of the sub-strata of the Earth before it is overly refined by industry into sheet metal, extruded I-beams, aluminum channels, tubes, wire, pipe, cold-rolled steel, iron bars, etc. I have often thought about non-resistant processes that would involve the actual sedimentation of matter or what I called ‘pulverizations’ back in 1966. Oxidation, hydration, carbonization, and solution (the major processes of rock and mineral disintegration) are four methods that could be turned toward the making of art.

…Technological ideology has no sense of time other than immediate ‘supply and demand,’ and its laboratories function as blinders to the rest of the world. Like the refined paints of the studio, the refined metals of the laboratory exist within an ‘ideal system.’ Such enclosed ‘pure’ systems make it impossible to perceived any other kinds of processes other than the ones of differentiated technology.

Refinement of matter from one state to another does not mean that so-called ‘impurities’ of sediment are ‘bad’ – the earth is built on sedimentation and disruption. A refinement based on all the matter that has been discarded by the technological ideal seems to be taking place. ….Not reduced to ideals and pure gestalts. The fact remains that the mind and things of certain artistes are not ‘unities,’ but things in a state of arrested disruption. One might object to ‘hollow’ volumes in favor of ‘solid materials,’ but no materials are solid they all contain caverns and fissures. Solids are particles build up around flux, they are objective illusions supporting grit, a collection of surfaces ready to be cracked.

…By refusing ‘technological miracles’ the artist begins to know the corroded moments, the carboniferous states of thought, the shrinkage of mental mud, in the geologic chaos – in the strata of aesthetic consciousness. The refuse between mind and matter is a mine of information.”