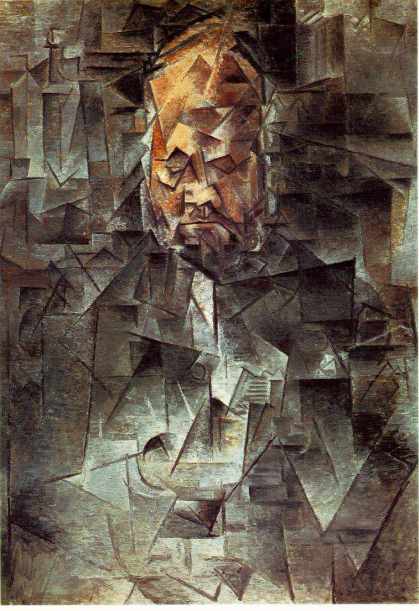 One of the aspects of the history of (western) art that the avant-garde had learned to despise: the effort towards an ever better imitation of an object world. Marks became a means where the mechanics of illusionism could be reduced to bare essentials. Forms were made to play across simplified edges in order that one could come across just what those mechanisms were. So what was illusionism, then?

To ask that question is to also ask what set of procedures lay at the heart of it. It didn’t take much for painting to materialize a world. This is the matter that was rediscovered in the early part of the last century. The work of illuionism was about placing the figure and ground, the convexity or concavity of a form, vanishing points, light and shading spread out across the field. It meant creating a palpable likeness and presenting that thing-likeness as a representation. With the introduction of Cubist practices, this is what fell under skepticism and was shown to be untrustworthy.

Just what was untrustworthy was the basic equation of illusionism, which is as follows: presence equals salience. This equation is there in an entire history of artistic development. Everything revolved around this idea that the success of the work was established on the basis of a strong, convex form up against the flatness of the backdrop. There had to be something there as figure to bounce off of an emptier thing, an ambience, background. What Cubism tried to do is ask the question of whether or not it was possible to make the body and space a strong equivalent. – That the machinery of the illusion could be reworked and the equation could be overturned by opening it into a paradox, or a determinate negation.

What Cubism introduced was an opening of the machinery of illusionism so that all of what appeared did so as a distinctness in parts, with all sorts of sharpening edges and differences, so that the machinery could open upon the ground.

What Cubism showed was that the basic trick of illusionism was dependent upon constructing what was not seen, or un-seeable. Rather than sticking to that equation a new system of singling out the parts of the world would be generated, alongside a new means of spacing, exacerbating the structures, pulling-out the background that was to remain silent in order for illusion to get itself done.

Presence was no longer secured by the un-seeable background in the painting: objects could be laid out in their interrelatedness without the painting being an equation of distinct separation between the presences and the ground ‘surrounding’ them. The eye was allow to spin around the picture, going in one way and out the other, interweaving among the things and coming out the other side, hinging itself on all the interlocking positions where there would no longer be one center, no longer a demarcation between the figure and its other.