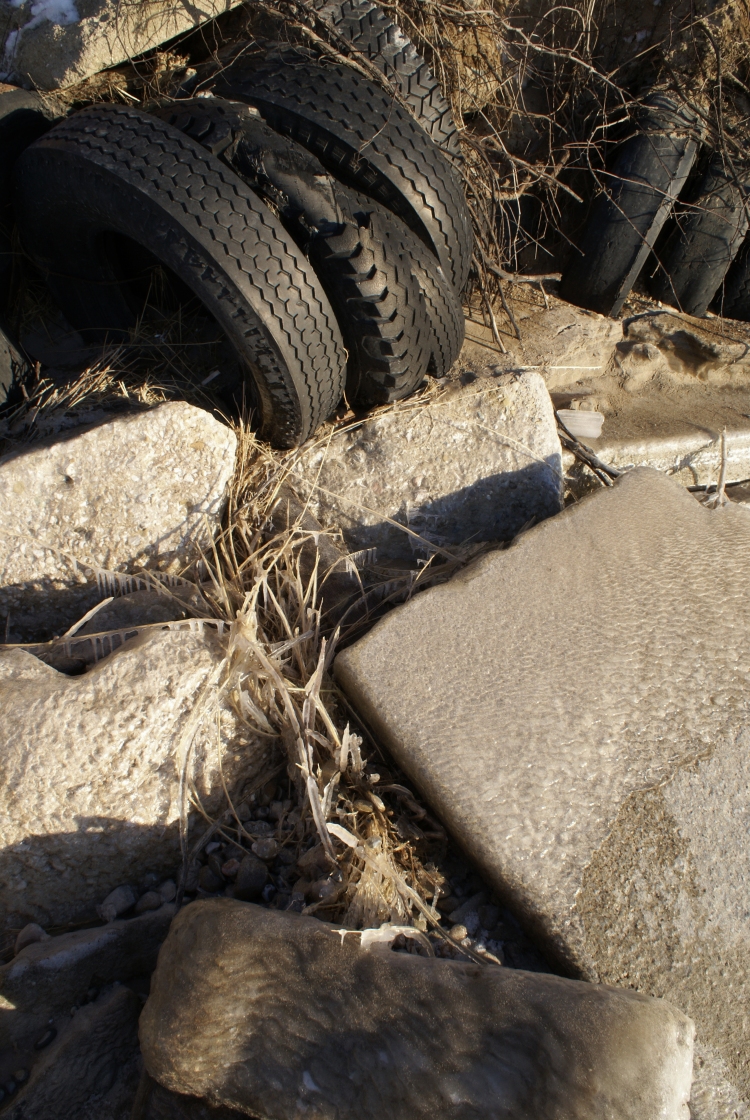 Living near the coast of Lake Michigan I find myself in the liminal space where things are always changing. As an artist I go to the shoreline frequently to absorb the atmosphere. The motions, colors and layers permeate through my head.

I observe the masses of concrete, rusty walls and the hovel of old tires all trying to hold back the coming waves. I climb up on the concrete and watch as the waves pummeling from below. All of culture can be found there sliding up against the flow.

The shoreline has led to explorations between mark-making and landscape.

It could be argued that mark making is one of the most fundamental elements in any type of art. Marks can be loose and gestural, structured or controlled. Marks can be expressive, descriptive, conceptual or symbolic. They are the primary building block to create lines, shapes, forms, splashes, drips or patterns. We have a tendency to tie them up with the human realm of culture as an attempt to signify through marks. Whereas the instant impacts of geologic material, landslides, volcanic eruptions, tectonic shifts, the carving of rivers and river piracy, desertification, sedimentation and erosion are all marks of the land – geological tendencies. The land is itself its own agency often creating marks at odds with the hard-edge of culture. But the two spheres of nature and culture are not so well defined. In the anthropocene each one is implicated into the other so that the mark-making of the artist and the mark-making of the land begin to slide over one another.1

Through engaging with the materiality of the Lake Michigan shoreline I’ve seen mark-making go geologic. I realize that I am no longer a controller of the field and I become an agency enticing the potential agency within the material itself to form its own image. What is expressed in the work is not solely the expressivity of the artist but also the expressiveness of the geology. In this way the work becomes a container for marks that resonate with the wider expression of the earth processes. Matter is self-assembling.

The shoreline is a dynamic, porous and ever-changing process. In the liminal space where water meets land I witness a world constantly moving, constantly pushing and pulling, giving and taking and renegotiating its boundaries. Like the image of the lake itself the dynamic features are burned into my subconscious, affecting my psyche but also fundamentally my body. It doesn’t take much for one to pan-out and begin viewing the ‘rest of nature’ as if it were the shoreline that is constantly slipping and changing. What the shoreline shows is that nothing exists on its own.

I and the Work: Mineralizing the Imagination

Finding myself in a space that is always changing I see the artist as someone who is absorbed into the liminal space: it is a space of pulverizing forces. It is followed by absorption: one is extended out into the earth processes and begins to take on the presumption that the geologic motions are ubiquitous.

At the shoreline the view of art as differentia specifica begins to break down. It is no longer autonomous from nature and instead is engaged in the creative force differentiating itself, unfolding in geologic dispersions. The marks are geomorphological forces. The work goes geologic when every mark emerges out of restlessness, having the ability to exceed itself and be exceeded. Thresholds are breached and points of no return ensue. The fundamental quality is that it is always open to new possibilities, creating a situation where what appears is always on the edge of turning into something else.

I could view myself as someone who works upon the world of nature in order to give it an order, but this classic view assumes that I exist on my own and that the work exists on its own, and further that the work could exist on its own in the face of nature that also exists as its own. Fences are propped up. But everything is always changing into something else. When the work goes geologic there is little room left for the staging of an identity because it begins to understand itself no longer in terms of an atomized item2 (and no longer a static) and instead begins to understand itself up against process – i.e. up against the ever-changing dynamic.

If becoming, multiplicity, etc., is fundamental to reality – if everything is constantly in metamorphosis or always changing into something else – then there are no stable things, only forces relating to other forces.3 I’ve come across the tensions and forces of the creative possibilities of the shoreline. Artistically speaking, the result is that I and the work are both caught up in excitation – in the becoming that admits no fixed identities – and this mutable interplay may allow the artistic imagination a purview into the dynamics of geologic differentiations. It becomes like movement-matter in the mind and specifically as a force of becoming in the instability of systems.

The geologic unfolding of matter acts like an iconoclastic event in the realm of the imagination: ‘mineralizing the imagination’ pushes me into the distributed gradients of the strata, rubbing up against the tendency of the geologic as mutable and expressive patterns of continuous variation.

On the shoreline I discover that identity is pulverized into the substratum of the geologic. As an artist I am conditioned by the catastrophic. When mark making goes geologic the work of art as imago – as a medium reflecting the imagination of the artist – begins acting like so much erosion upon the identity.4 Drawn out as the major implication of this merger between mark making and landscape is that the geologic thrusts across identity like a tectonic plate.

[1] The Anthropocene makes a problem of all of the old divisions and demarcation lines and as such in the Anthropocene we can no longer afford to think divisions. The liminal space where water/land is rendered undecidable erupts into the undecidability of other binaries: nature/culture, organism/niche, inside/outside, self/other, human/animal, animal/vegetable, past/future, life/death.

[2] The problem with identity is that it is often taken to be this static thing. It is reified in order to better serve the system of capitalist social relations.  In my view of the geologic image, I consider it to be a type of iconoclasm aimed directly at the space where an identity could be formed.

[4] I use it as a strategic model in order to pulverize identity into the soil, stripping it of its impulse towards accumulation (which is the nexus of how identity operates in the personalization combines of consumerism): the geology buries accumulation, stripping the temporality of capital.